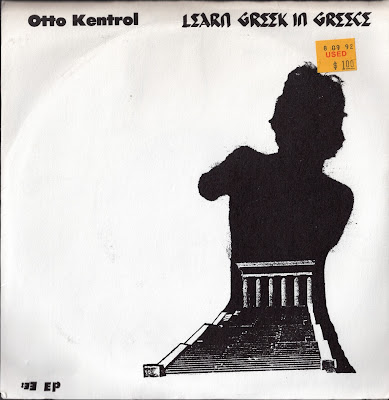 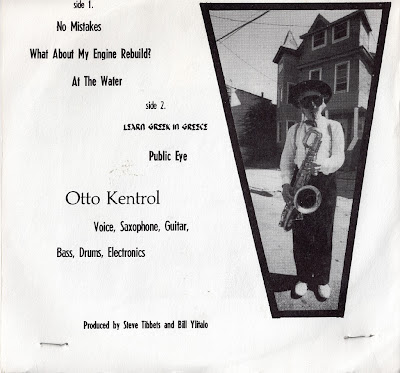 Mutant Sounds has the 12" version of this up, I'm guessing this is an earlier self released 7". It seems like the artwork got polished a bit for the 12".

At times this reminds me of Freiwillige Selbstkontrolle - primitive rhythm machine, staccato guitar, simple observations of everyday activities. Then a blast of screeching sax in one ear and blistering guitar in the other reminds me that perhaps sounding like Munich was not the goal here. Otherwise I can't say much about Otto, other than he seems to be a Wisconsin native which would explain this record crossing my path in my Minneapolis days. I'd guess he spent some time in NYC, judging by the sound of this and there is some photographic evidence of him at CBGBs.

Producer Steve Tibbets is probably known to some, especially in the Minneapolis area, and an anonymous poster at Mutant Sounds notes of the other producer: 'Bill Yiltalo had ties to Madison's Appliances SFB and later, Reptile Palace Orchestra, I think. And also, New York's Swollen Monkeys.'

'No Mistakes' offers a smart alec critique of the ever-hated 'citizen-consumer' set to contortions-style no-wave. "You've got records by the stacks and a brand-new betamax, life is good when you've got something to go home to."

'What About My Engine Rebuild' is a standout with a lyrical protagonist that is simultaneously lampooned and sympathetic. Reminiscent of FSK: drum machine, simple guitar and lyrical treatment of emotions tied up in quotidian concerns.

'At The Water' really works the histrionic vocal delivery to humorous effect.

'Learn Greek In Greece' is the least structred track: offhand remarks and observations about the weather, weather forcast set to ominous bass and sax/guitar improvisations.

'Public Eye' swelling sample and hold synth noises fade in and out of a slow disco beat with octave bass riff. Sax squelching and offhand musings linking indigestion and malaise with cosmically controlling corporations, or something like that: 'it must have been something that I ate, sells well so it's worth something at any rate, so smooth is the sad story'. Definitely reaching for the beat poet mantle here, wanting to point out society's ills as a detached and disinterested party :-D