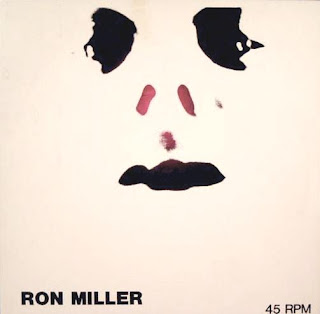 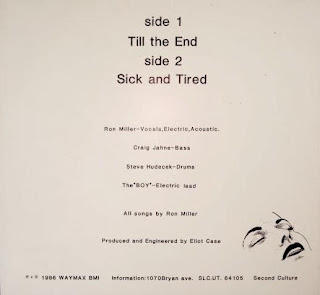 Making it's way from Salt Lake City, Utah, onto your computer chips. Is an old favorite of mine, courtesy of Ron Miller. The savage strange sounds of Sick and Tired are made all the more deranged by the effects processed vocals, bemoaning the tale of a war vet that's had to much to think. I remembered Sick and Tired as being the standout track, but after listening to this again lately Till the End has been fastened to my memories repeat button. Seriously can't get it out of my head. Not that I want to with Ron's warm croon and some of the best mystifying lyrics to demystify. 'just look inside of someone that you know so well. often called yourself, but then can you tell which one that is?' Punk business manager blogged Ron's earlier band Angle here.

Ron was kind enough to write a few words of explanation and description.
This was a result of experiments recorded somewhat surreptitiously at KUED studios after hours about 2 years before the record was pressed. The studio players were selected from my ultimate wish list of guys I wanted to work with in the SLC, UT area. The backing tracks were recorded in a few hours on one day. None of them had heard any of the music. They did a great job and special thanks to the producer, Eliot Case, for all his hard work and for making sure it got pressed. I slapped the cover together at the local Kinko's for all of $10. The photo is a self portrait taken on a photo-lithographic camera used to make plates for small printing presses. The use of acoustic guitar was largely associated with Yacht Rock or Folk and was considered somewhat radical at the time.