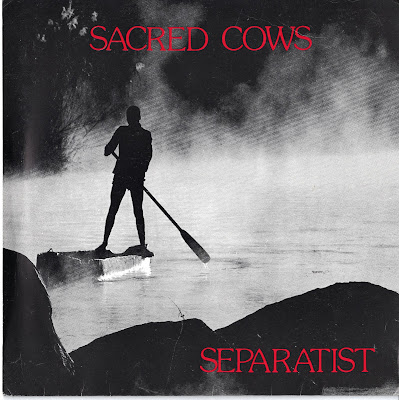 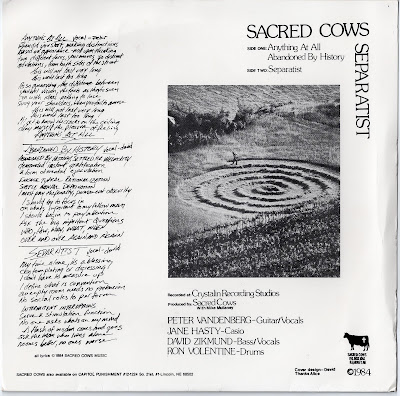 A great Nebraska post-punk band. Casio, fuzz guitar, competent rhythm section and varied vocal delivery from wistful (on Separatist, a pean to willful self isolation) to humorously arch and angry (on Abandoned by History.)

I think I picked this up at Trade-a-Tape in Lincoln when I was in High School during one of my regular record runs: first Dirt Cheap then Trade-a-Tape looking for used records and then (if there was any money left) through the alley to Pickles for new imports.

Years later I got to know bassist/vocalist David Zikmund's older brother Brian (who I believe played with Sideshow's Paul Tisdale in Sam The Butcher, a long running Lincoln pounding-on-stuff project) When I figured out the connection to Sacred Cows I surprised him with some choice Sacred Cows lyrics randomly dropped into a conversation... he was very surprised as they were pretty well forgotten by 1991. When he got over his surprise he probably went back to asking our mutual friend Craig if he was going to roll a big fatty before the Simpsons started.

I got the idea Sacred Cows were from Kearny... I think L. Kent Wolgamot said so in his actual review of this record in the Lincoln Journal Star (he liked them but panned the Boat People for sounding snotty like Johnny Rotten... or that's how I remember it... why do I still remember this stuff?) Maybe they were actually from Lincoln though. Jim Jones of zero-hour Lincoln punk/wave zine Capitol Punishment says so and he ought to know. Still the mailing address for the Band says Kearny. It's a big mystery! I always liked the idea of the Sacred Cows playing gigs in Kearny, setting up their casio at Cattlemans while families scarfed Prime Rib.

They had a track on one of the Capitol Punishment cassettes too, I'll add that to the 'to blog' list.
[update] David Zikmund informs me that Brian is his older brother, and that there were a couple of other Sacred Cows tracks that did not make the E.P., maybe we can get hold of those and post another update...