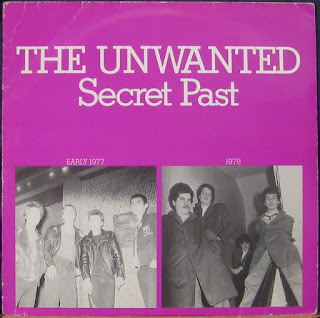 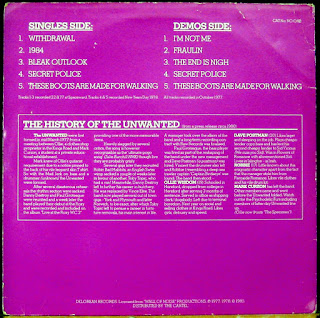 Some great early UK punk here. This compiles two Unwanted singles on Raw Records plus five demos they did all circa 1977, 1978. 1984 has long been a favorite since I heard it on MMR radio in 1985 (oh no a year to late!) and that song drew me in to buy this a few years later. The End is Nigh is also a highlight, where they are already commenting on the tendency of punk conformity in 1977. Secret Police see's them trying on some dub reggae, which was a common thread for many of the UK bands of the day. Bleak Outlook, I'm Not Me, and Withdrawal are cool punk blasts. Whilst Fraulin appears as their nervy take on a love song. Also you get a punky cover of These Boots Are Made for Walking.

If you read the back cover you will discover that Ollie was later the singer for Specimen, and that some of the others went on to play with The Psychedelic Furs.
new link
http://www.4shared.com/get/WdVXOfRN/The_Unwanted_-_Secret_Past.html
Posted by Dane at 9:13 PM

Email ThisBlogThis!Share to TwitterShare to FacebookShare to Pinterest
Labels: 1977, 1978